I'm running a day late with this one. Lawn Fawn featured my spring flowers on their blog yesterday, but I wanted to share it here as well.

If you've been here for awhile,  you know that this is party season over at Casa Muni.

My 3 kids have birthdays within 11 days of each other, and I love to craft and bake to make it special for them.  (if you'd like to check out last year's parties, click here, here, and here.)

This year is a first for us. We are sweating our way through renovations on our new home, so we decided to postpone the parties and have a bigger, blowout party for all 3 in the summer. The kids are taking it like champs.

I still wanted to create something to make each of them feel celebrated on their special days. Here is a taste of what I made for Sofia, although the timing makes it perfect to consider for Mother's Day too: 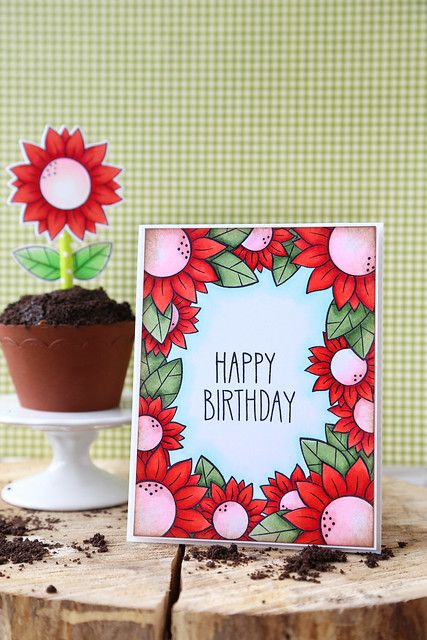 My biggest girl loves flowers, so I masked my little heart out to create something that she'd love.

And then while I was colored flowers, I colored a few more: 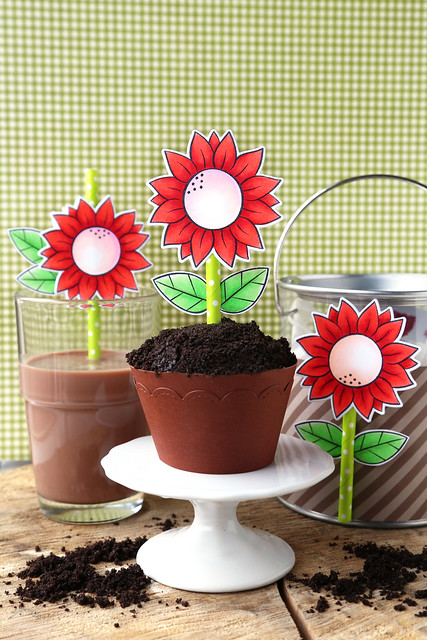 I used the Lawn Fawn cupcake wrapper, but added another strip of brown cardstock to the top so that it looked more like a flower pot. The chocolate cupcake was covered in oreo crumbs to make it look like potting dirt.  A green straw doubled as a stem for the flower. 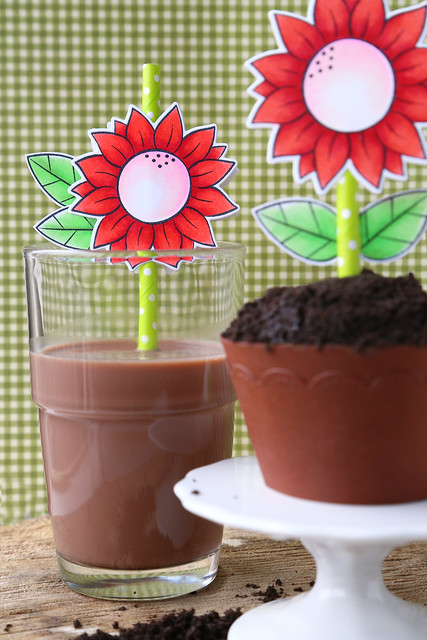 I filled the cup with chocolate milk and added another flower to the drinking straw. 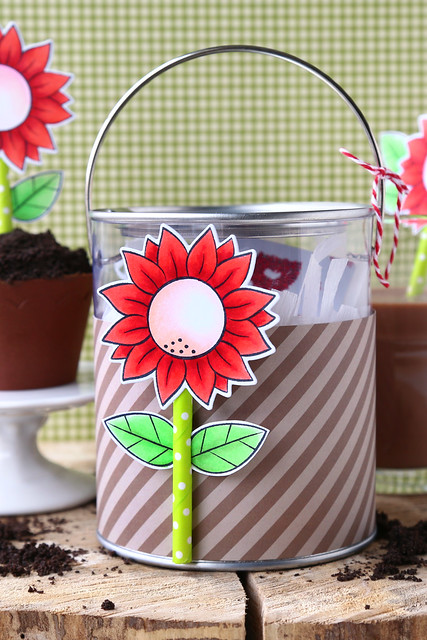 Am I the worst mom in the world to be throwing a gift card at my kid? gah. I dressed it up, though, and added another flower to the front.  I cut slits into the sides of the straw, and slipped the leaves in there (I did the same with the cupcake topper.)

I'll be back tomorrow with a renovation update, and a round-up of the new lighting I've purchased for the new house!

This whole blogging/renovating juggling act isn't going as I planned.

To be honest, this whole renovating things isn't going as we planned either. It's what people always say, right? It will take longer than you think, cost more money than you anticipate, and you will find surprises along the way.


There have been some surprises:

♥ We ran out of hardwood, and it will take another few weeks to complete the flooring

♥ The front door needs changing, even though the previous owner changed it, because the quality is so poor

♥ We found evidence that the basement had flooded in the past, despite reassurances from said previous homeowner that there had never been water damage down there. We are talking to neighbors who say that it was a few owners before that lived through the flood.

We're not too worried about these surprises, but we've found these out in the space of a month and are worried that there's more lurking around.

In any case, there are fun things happening:

♥ We've replaced the parquet flooring on the top 2 floors (minus the missing parts.) We decided on a grey-ish maple. It looks better than it sounds. ha.

♥ Removed wallpaper, wallpaper everywhere. Some walls were salvageable, but others had to be cut out and replaced. She glued that stuff down to last. But as soon as it all came down and the walls got a good coat of primer, it was like a breath of fresh air.


♥ We ripped out the staircase spindles and rails. New posts are going up and it will change the look of the whole main floor.

Here's a look at the living room in progress. With the wallpaper gone, and the wall separating the staircase gone, it's already like a whole new room.

I am not crafting these days, but would you like to see more of what's going on at the house? And would you be interested to see things like paint colors? Lighting choices? Rugs?

Hi there, and welcome back to another day of Lawn Fawn inspiration.  We're showing off the stitched square stackables. I love these die sets! 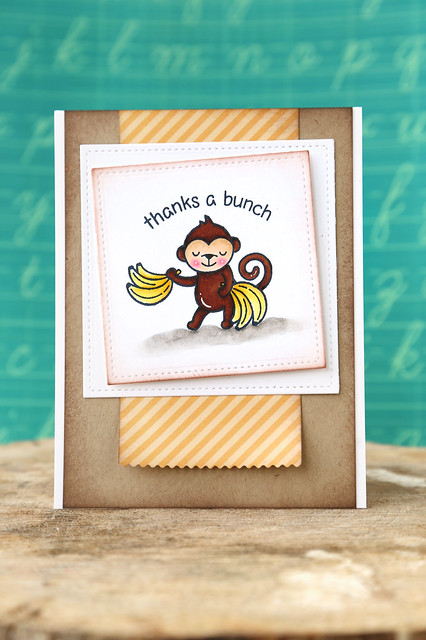 I layered the squares for an easy focal point on my card. By way of some masking, the monkey is holding 2 bunches of bananas. I stamped in the bananas, but then I had to come in with a copic pen and draw in the top of the stems, because the stamp image isn't long enough. Make sense?

I just love this little monkey standing up with the bananas! I usually stamp him swinging from the trees, but he looks jaunty this way. ha.

Email ThisBlogThis!Share to TwitterShare to FacebookShare to Pinterest
Labels: critters in the jungle, lawn fawn

something old, something new for lawn fawn inspiration week.

I'm doing things halfway this month, since we're covered in plaster and primer and all kinds of dust from sanding down the new house.

I do have a new Lawn Fawn card for tomorrow, but there have been a few on there this week that I already blogged.

In case you missed them, I thought I'd link up the original posts. 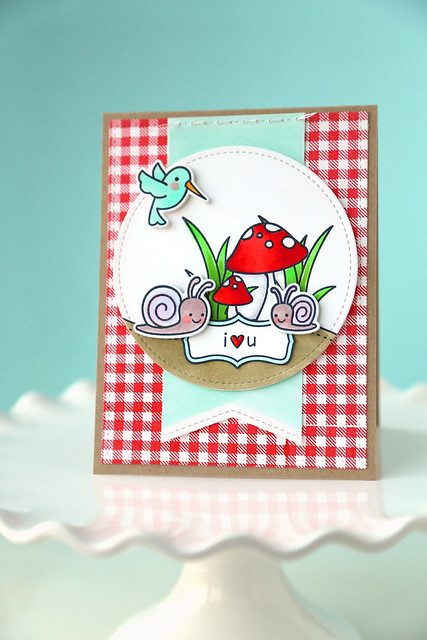 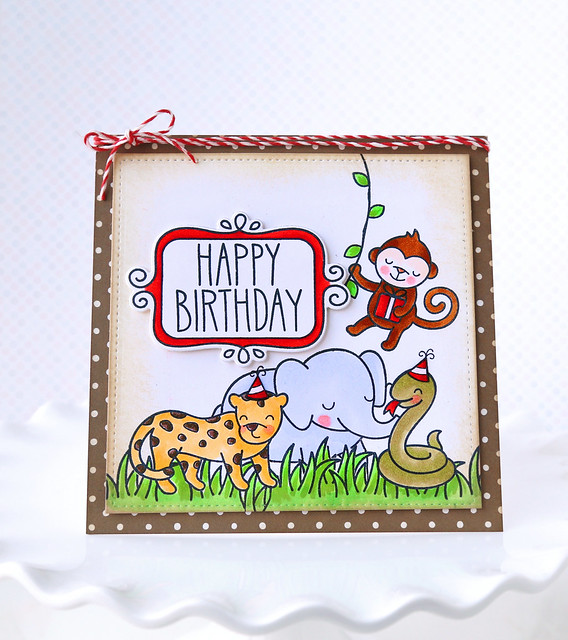 I will be back to posting more regularly next month, I promise! In the meantime, I'll be bringing my camera over to the new house today to snap a few in-progress pictures.  I think an update is in order!

Hi there! It feels like too long since I've posted, so I'm happy that we're here now, to kick off Lawn Fawn's April inspiration week.

Today, we're showing off "Best Pun Ever." It's such a cute set, with tea pots and fans and cheese and puns to match. 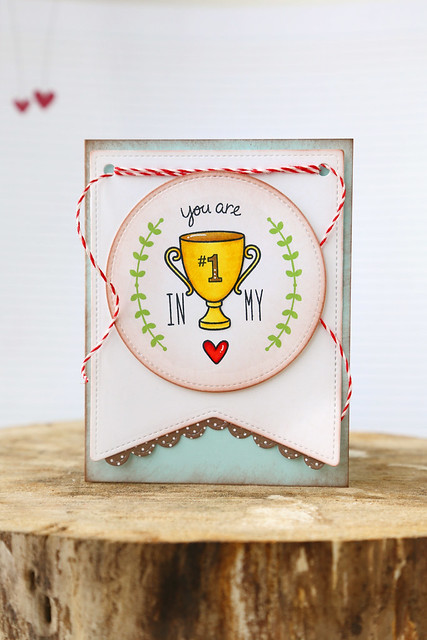 Nobody is more surprised than I am to see no smiley faces on this card. I don't know what to say. The stress of the new house renovations is obviously getting to me.

Sidebar: let's be honest. April won't be my best blogging month, but if you're interested to see more of the progress we're making in our new home, you can come see on instagram (look for mom2sofia.) So far, we've ripped down a slew of walls that were cottage-cheesy underneath the wallpaper layers. gah. New drywall is up and you'd never know we had to do all that work just to get clean walls.

Saturday morning, coming at you with a little Photobomb selfie: 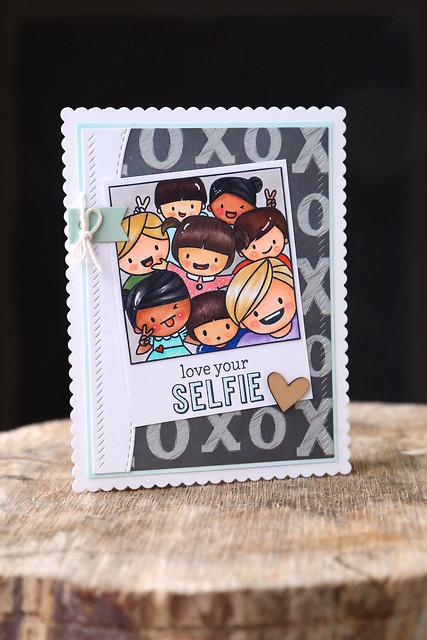 I love how large this image is, and how much fun it is to color it! I tried my hand at some different skin tones and hair colors. The little winking girl in the front looks like my childhood Sri Lankan bff.  But my fave is the little boy in the middle, at the bottom. The deer-in-the-headlights expression cracks me right up. 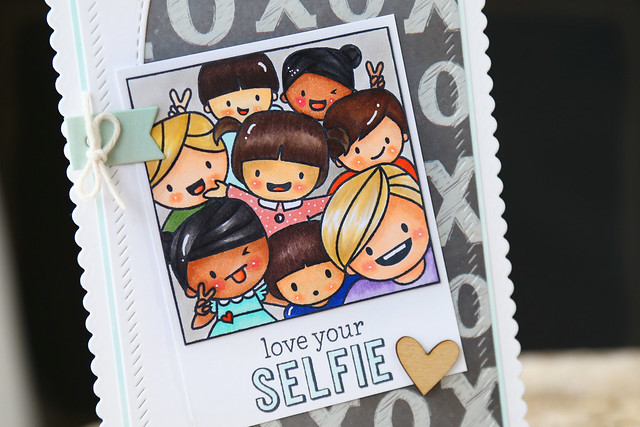 I made myself a faux-polaroid, the old fashioned way: by cutting out the image and mounting it onto a white rectangular piece of cardstock.

All of the dies make putting a fancy looking card together a snap: I used the sew fancy die set, the femme frames, and a landscape die for the curve that runs behind the left side of the polaroid.

I also have another card that got lost in this month's shuffle: 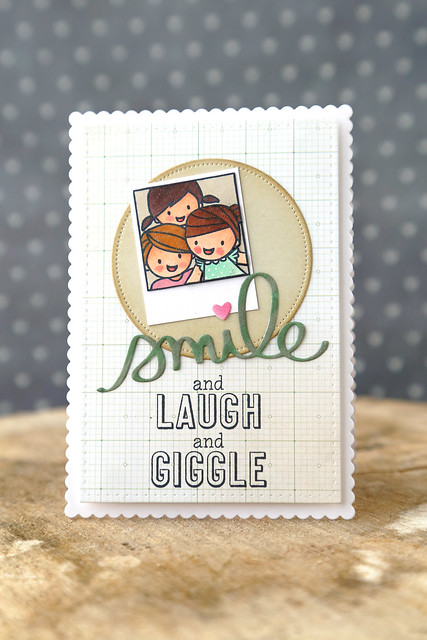 I used the new smile die, since it naturally goes with the cuties from Photobomb! 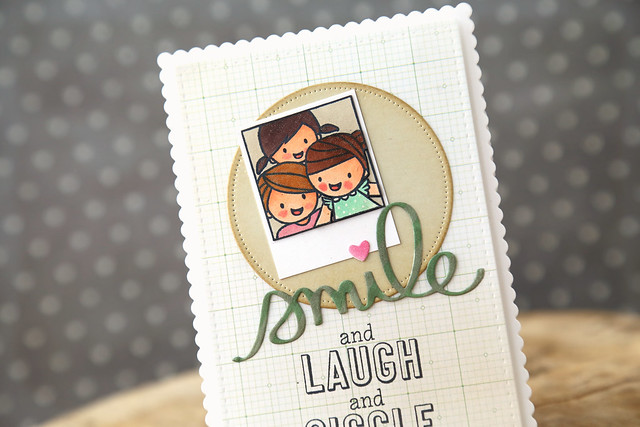