animals in a jar! 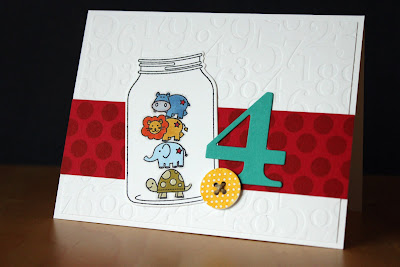 I was just playing around with the "friendship jar" set and seeing what I could put inside.  Thomas, taking a break from his game of Wii bowling, suggested I throw in some pirates.  I thought the sight of pirate heads floating around in a jar would be kind of morbid, so I re-directed him to some of the animals from "tiny treats: birthday."

I can't believe my snaggle-toothed baby (he had a little accident last week - it's all I can see when I look at him, lol) will be 4 next month!  He liked the animals so much, that I decided to really make his day and slap a "4" on there.  For Thomas, in honor of his special day - albeit a little early :)
Pin It
Posted by Elena at 1:55 PM