I haven't played along with a play date cafe challenge in awhile... but when the suggested colors of the week are listed as "plum, pear, and moldy cheese..." hmmm... I'm on it. 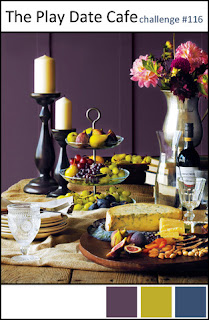 I used 3 colors for my card: pale plum, kiwi kiss, and not quite navy (all SU inks.) 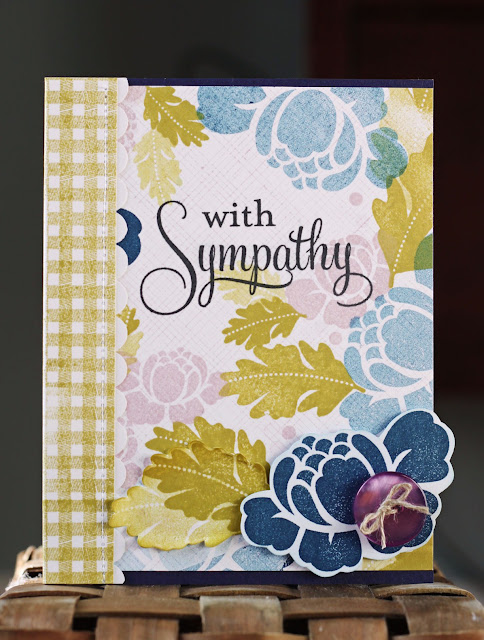 I know it's "rosie posie" again, and you'd think after making 16 cards, I wouldn't pick up it up again for awhile... but I love it, and it. was. right. there.  hee hee!  Ever just use a set because it's on the desk-top?  Such a lazy crafter :)
I stamped all the images in full-strength and then again without re-inking.  Made it really fast to fill up the space!  I then stamped the hero arts envelope pattern in the plum color over the whole thing.  The gingham border on the side wraps around to the back of the card, like a book spine.  Love that look.  On the front, I added a scalloped edge, peeking out from under... The gingham border was stitched down on either side. 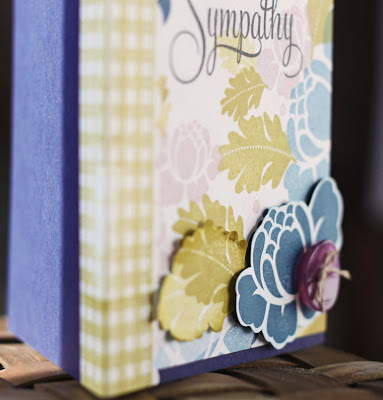 I then cut out the large flower and some leaves.  The leaves were stuck down to the card, but I played with their edges to give them some dimension.  The flower was mounted on foam squares to give it some more height.  The card-base looks a bit purple in that second photo, but it's really a nice navy blue :)

Hope you like it!  Have a great weekend.
Pin It
Posted by Elena at 5:35 AM