So, this month's inspiration was a bit different... no "themed challenge"... but instead, this awesome photo.  You know I'm all about the eye-candy - I've been wasting so much time on pinterest, party blogs, etc... all for the eye candy :)  And usually it's pretty easy for me to pick apart a color-scheme, or element of a picture and translate it to my paper-crafting... but this one?  Yikes.  I sat on it for many moons and had no idea what I could do with it.
I tried out different ideas - swiping ink spots across the page to make those soft stripes... embossing a dragonfly stamp to mimic the shiny hook... princess-y images... but, somewhere in the space between the picture in my mind and the reality on the page...  Uh-uh.
The reason why it wasn't working?  Well, maybe my ambition was too far ahead of my skills on some of the techniques I was trying out... but I'd like to think it's because I wasn't sticking to my own style.  This picture isn't one I would have picked out.  Too many colors, too many elements... and I was trying to make it all work so literally.  When I stepped back a bit... 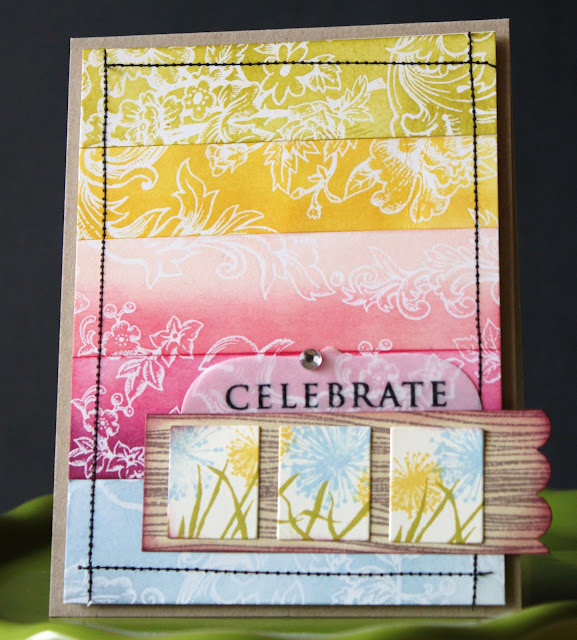 Ha.  Ok, I know it's not the best card ever or anything, but compared to my previous attempts, pretty darned good...

This is what I took from the inspiration photo:

- the stripes on the wall.  I mimicked the stripes by grabbing some SU "presto patterns" paper and sponging different ink colors on the various strips of paper.  It looks like emboss-resist when you do that - so cool!
- the wood-cubbies... I took a strip of white paper, stamped on it with PTI's woodgrain images and then used distress inks to grunge it up.  I then die-cut 3 alphablocks and stamped them with botanical silhouettes.  (I know it's not princess-y or anything, but I still felt like the florals worked with the whimsical nature of the inspiration photo...)
- the bling of the hooks.  I added the gem above the greeting (from think big favorites, I only inked up the "celebrate" in "celebrate today"). 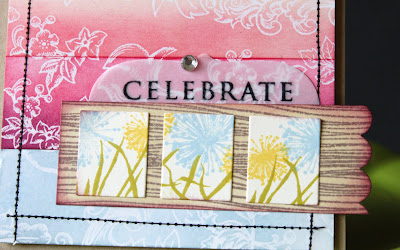 I also added some black stitching around, and inked up the sentiment in black - I was drawn to the bits of darker string hanging from the skirts, and the shadowing inside the cubbies.  I felt like it grounded the image...

And there you have it!  I hope you liked my take on the photo - I'm itching with excitement to check out other interpretations!

Have a wonderful day.
Pin It
Posted by Elena at 6:08 AM